That is how he started collecting paintings from various Indigenous artists.

James’ love for Indigenous art blossomed with the NHFC by collecting art pieces from artists such as Jackson Beardy, Bob Boyer, Allen Sapp, and many other talented Indigenous artists.

In 1996, James passed away, but his passion for art lives on through his collection.

There were a lot of artists that embodied James’ concept of preserving heritage and culture through art.

Allen Sapp and his work stood out for the Kurtz family the most.

The Kurtz family would often attend Allen’s art exhibitions, and because he was a residential school survivor “whenever he had an exhibition and when he would talk, one of the first things he’d ask the group was how many could speak Cree,” said John Kurtz, James’ father.

This was one of the reasons the Kurtz family liked Allen so much, because it was obvious he wanted the culture to live on just as much as James did.

Allen was like family to them and they developed a very strong bond once they became his manager. John says, “we were his manager, but we were his family (and) we were like brothers.”

After James’ passing, the art was left to his father. When he retired, the collection was placed in the Cumberland Gallery in 2003.

Then in 2004, the NHFC was officially transferred to the FNUniv, which includes a jaw-dropping 110 pieces of Aboriginal art. This donation was accepted and greatly appreciated by Dr. Eber Hampton, the president of the FNUniv at the time.

In an email John says, “In his announcement accepting the donation Dr. Eber Hampton, President of the First Nations University of Canada, said ‘The objective of the foundation is to promote creative programs in the Aboriginal community as a valid part of the education and development process of aspiring artists, and to help native people achieve a sense of pride through accomplishment by their own people.’”

Much of the art is on display around the campus, and students, staff, and visitors alike can see it every day. Other pieces also grace other institutions, like the Saskatchewan Legislature, on loan for many more people to enjoy.

“It beautifies our campus, and will enrich our teaching and research activities for years to come,” says Dr. Lynn Wells, Vice-President Academic of the FNUniv.

For the Photo Gallery:

The First Nations University of Canada is home to some outstanding and amazing works of art; artists such as Bob Boyer and Allen Sapp grace every hall.  Above is a virtual art tour of some of the pieces you can see if you come to the First Nations University of Canada.  Pls note: Some of the works were on loan at the time of this story being published.  This gallery will be updated as time allows and when the pieces return to the FNUniv.

Take a virtual tour of some of the amazing artwork at the First Nations University of Canada. Each piece is followed by the title and description. 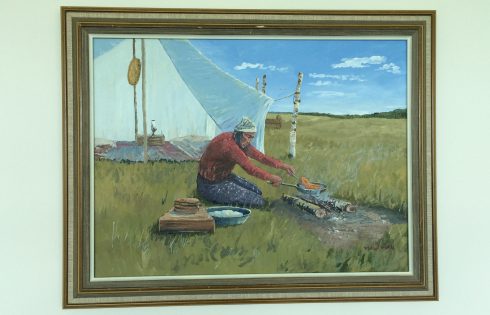 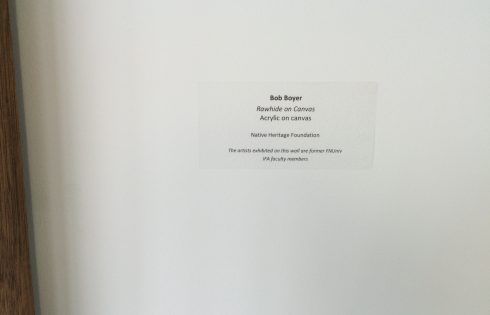 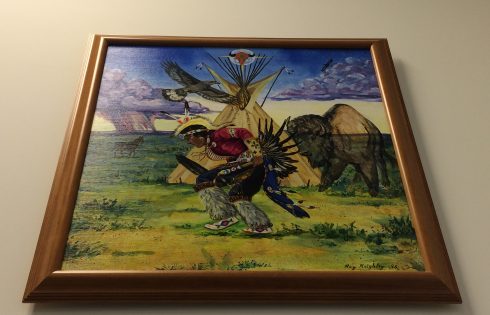 View all posts by Author